I’ve been playing a little bit of TF2 this afternoon, and I have managed to sell enough junk to purchase a couple of TF2 cosmetics from the Steam Market: 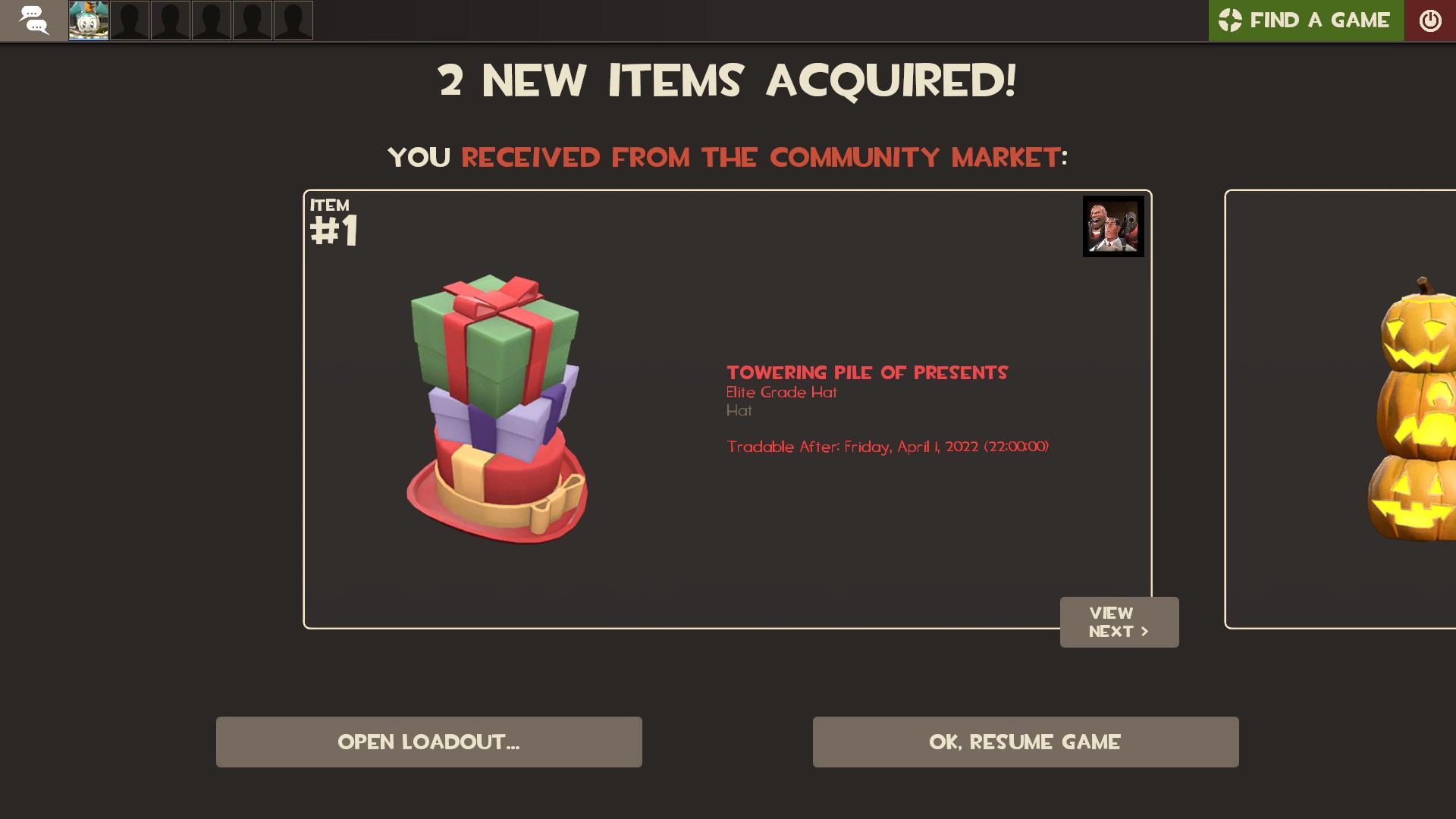 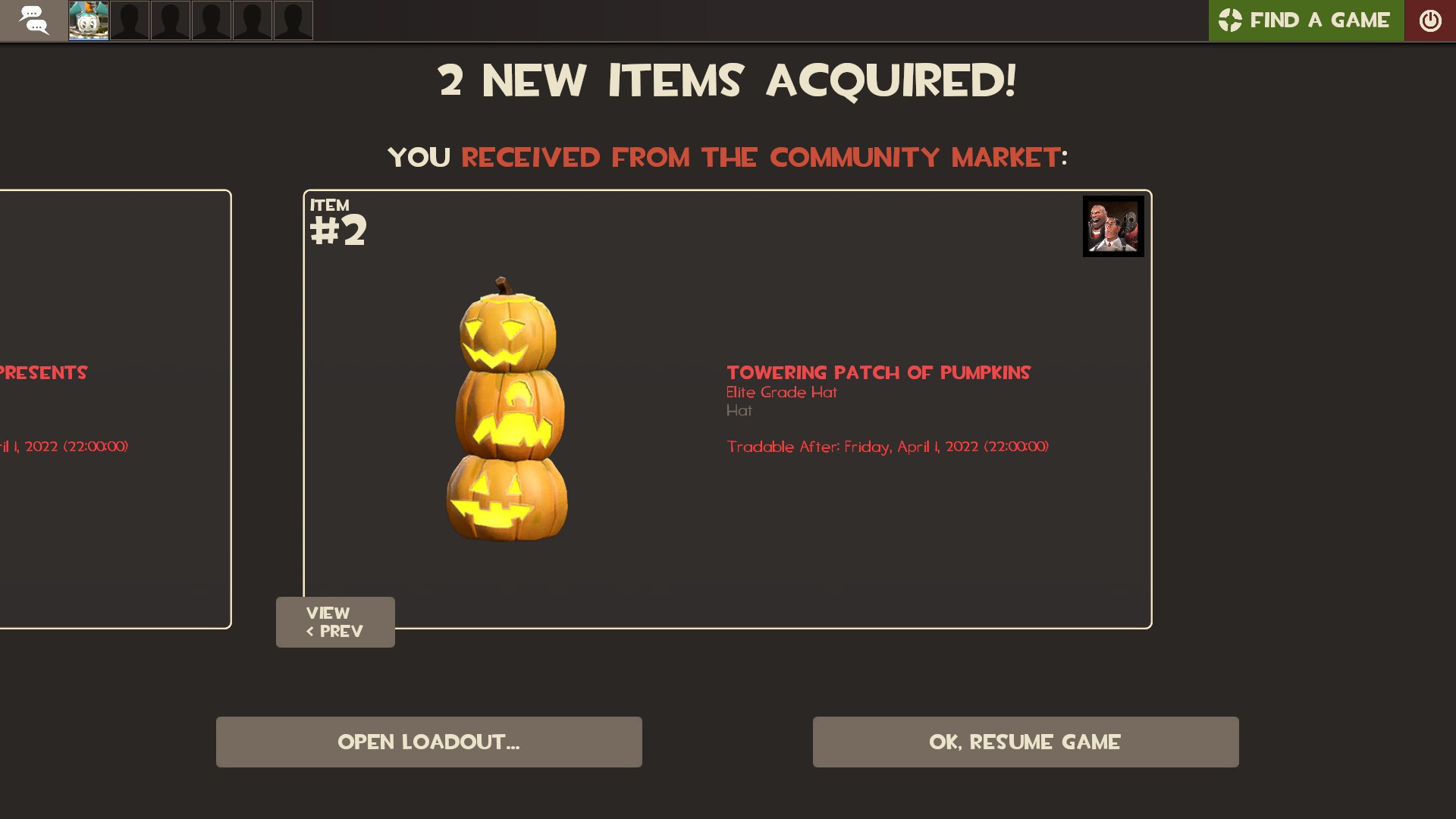 As a result, I’m satisfied with these towering piles of holiday-themed hats. 😛

I’ve been recently selling a bunch of Steam trading cards, and purchased enough money to buy a few TF2 War Paints from the market. Here are three of my weapons that I’ve redeemed after using up all three of my War Paints: 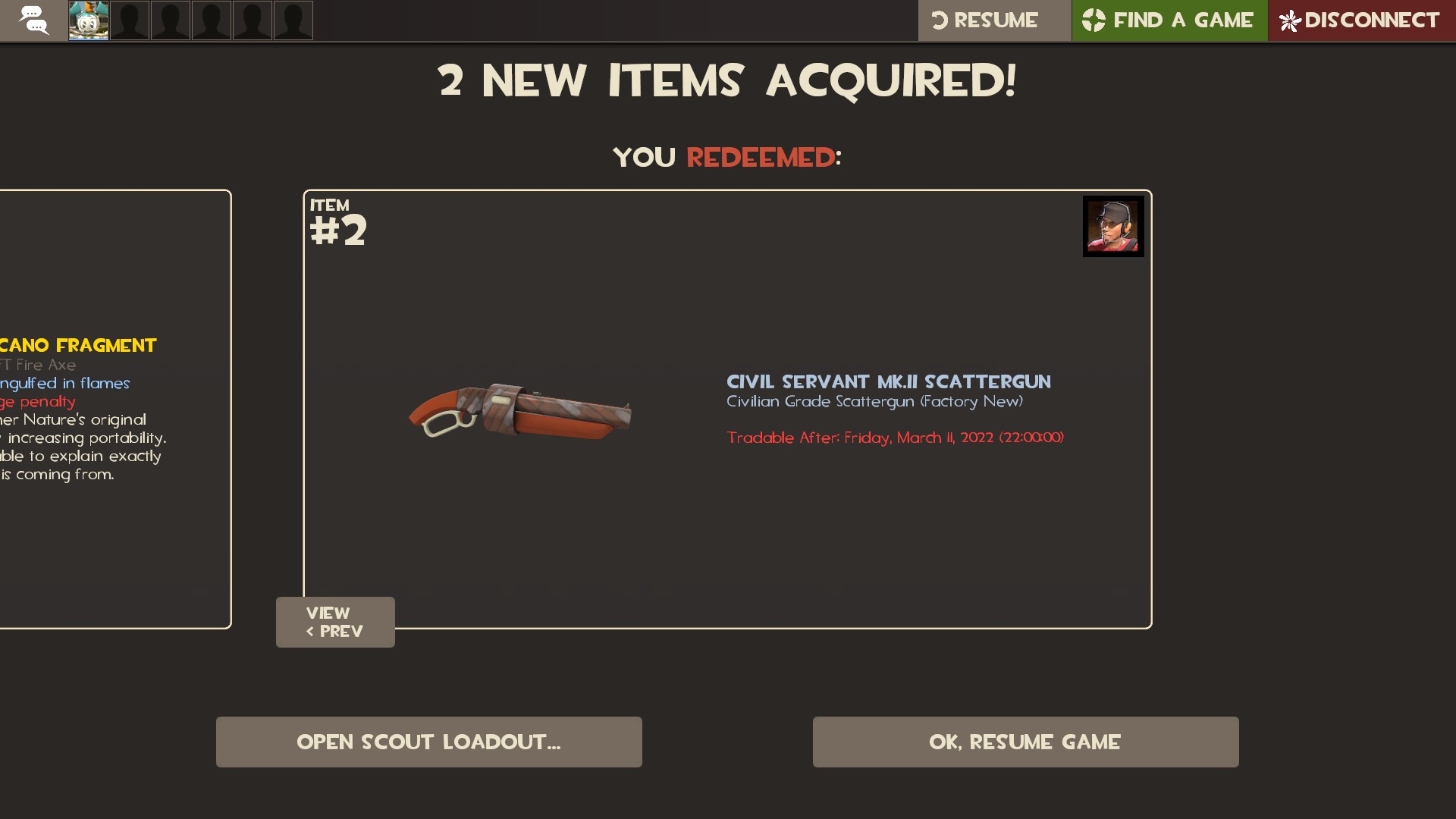 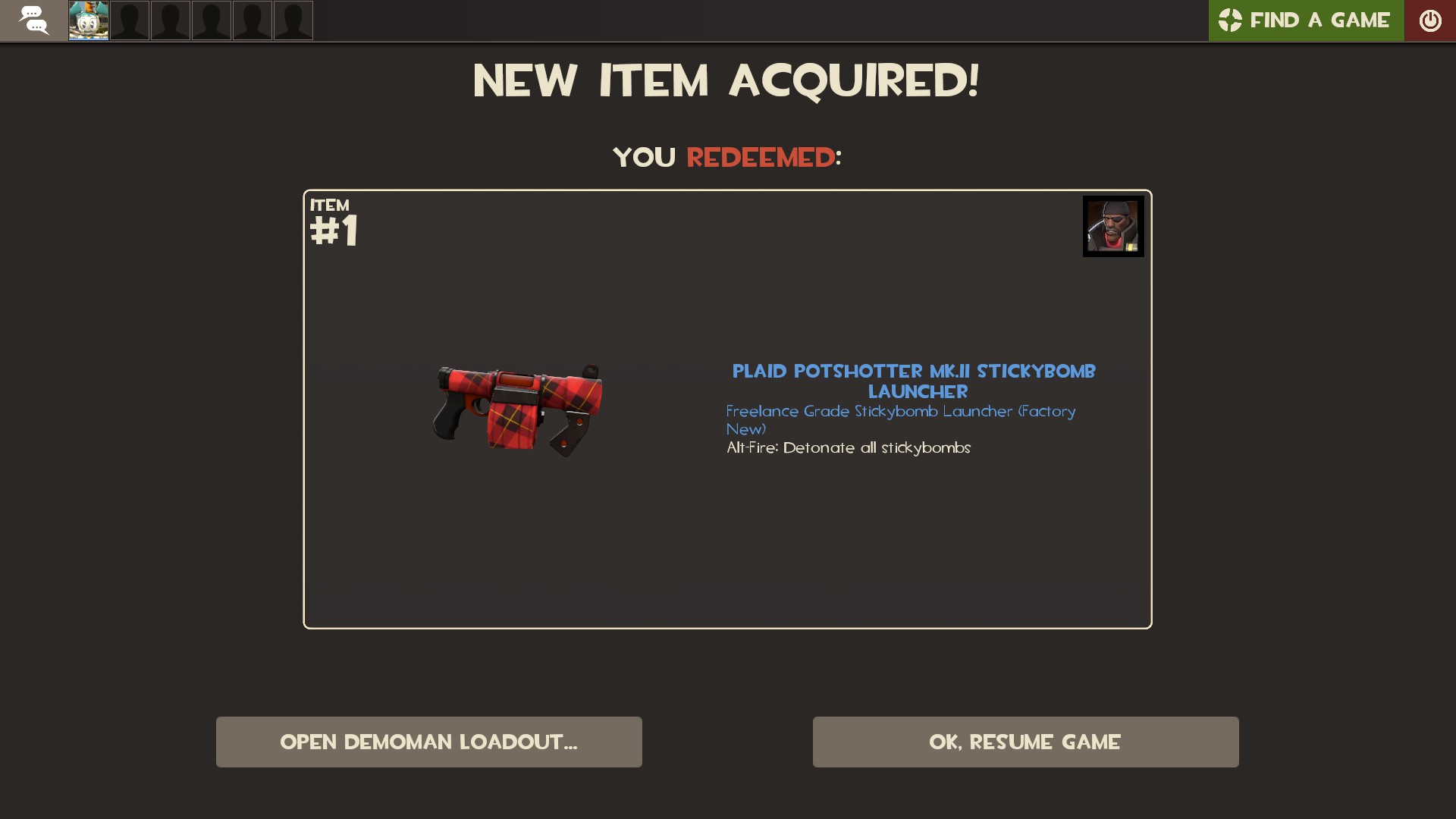 I’d say those are all excellent selections for me, and now I’m fully satisfied with them. 🙂

After I played around some TF2 the other day I went to go to the Steam community market and spent enough money to purchase a cool-looking snow globe hat for all classes after selling just enough trading cards:

I am very satisfied with that all-class cosmetic, and what I like about that hat is it has a team-colored 2Fort building in the snow globe because I find that interesting. I also like how this hat has two styles named are “Snow” and “Dust” which they both look nice. 🙂

Last night after playing around some TF2 I decided to sell enough pieces of junk to purchase this scorching slouch hat from the Steam market: 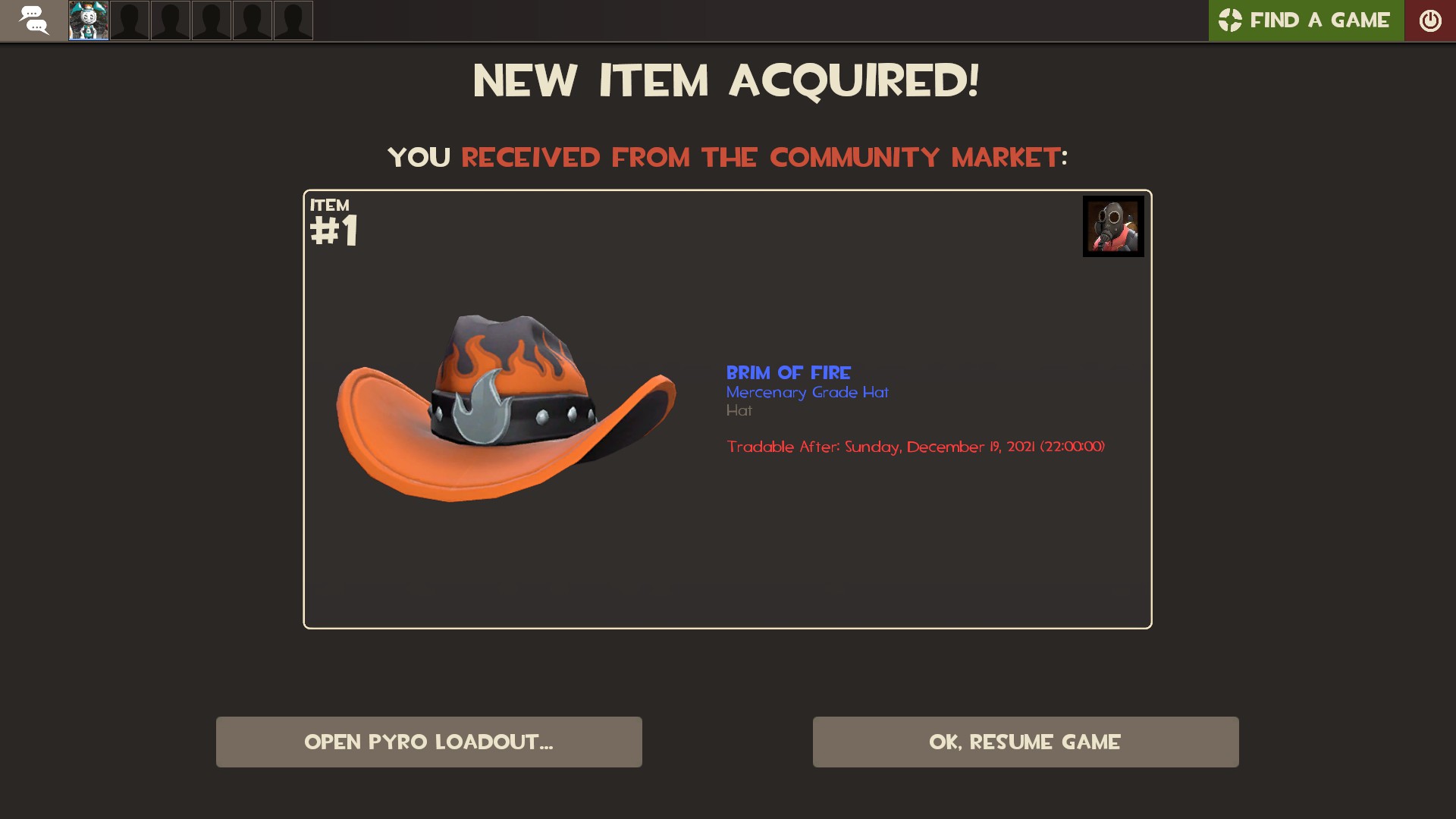 Now THIS will be a great Pyro cosmetic for me. I’m 100% satisfied with that. 🙂

Been selling quite a few pieces of junk off my Steam inventory lately after playing around on random community servers in TF2. I have managed to sell enough crap to purchase some latest gear from the Steam market including two Strange pocket buddies and team-colored Summer Shades after getting rid of my lime green Summer Shades along with the other junk that I don’t need for right now. Here are a couple TF2 screenshots of my two latest Strange pocket buddies:

I can’t wait to get more TF2 gear during the Steam Summer sale this year. 🙂

Sorry for not posting last couple days ago. I have been playing around on some TF2 on random community servers lately. Before I started playing I decided to sell some junk that I don’t need anymore to buy myself a few things in the Steam Market. Here are some screenshots of TF2 items that I bought:

Either way, I had some excellent fun beating up opposing players using various weapons, helping my teammates battle their opponents, etc. 🙂

I finally managed to sell off enough junk to buy this Dragon Slayer War Paint:

Plus I got the Merc Stained War Paint and a Genuine straw boater for the Sniper as a bonus:

I already used up my War Paint and obtained a couple of decorated weapons:

So now those two decorated weapons have been added to my backpack along with the Smissmas Sweater Grenade Launcher from last month.

I’ve been selling a bunch of Steam trading cards from the community market lately because I was thinking about getting the Dragon Slayer War Paint if I have sold enough cards to buy it. Here’s a picture of the War Paint that I was talking about:

Anyway, I have received a total of 70 cents so far after selling the cards from the last couple days ago. 🙂 More trading cards and other junk will be sold any moment until I have enough money to purchase the War Paint I’m looking for.

Been playing some more Community servers in TF2 lately after getting some Steam games from the store because the Halloween Sale is going on until the beginning of next month, and I also bought some TF2 cosmetic paints and War Paints from the market. Here’s some new War Painted weapons that I’ve got:

But yeah, I’ve had fun so were the other people who were on various Community servers. 🙂

I sold enough trading cards this to buy a couple of War Paint tools from the Steam Community Market and add them to my Team Fortress 2 inventory: 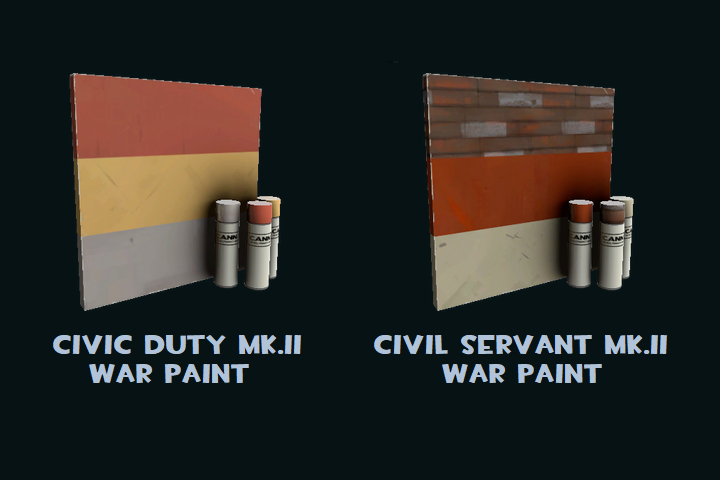 And here’s two more of my War Paint weapons that I’ve received:

Oh, I also bought a Radigan Conagher Brown paint tool and applied it to my Sky High Fly Guy for the Soldier: 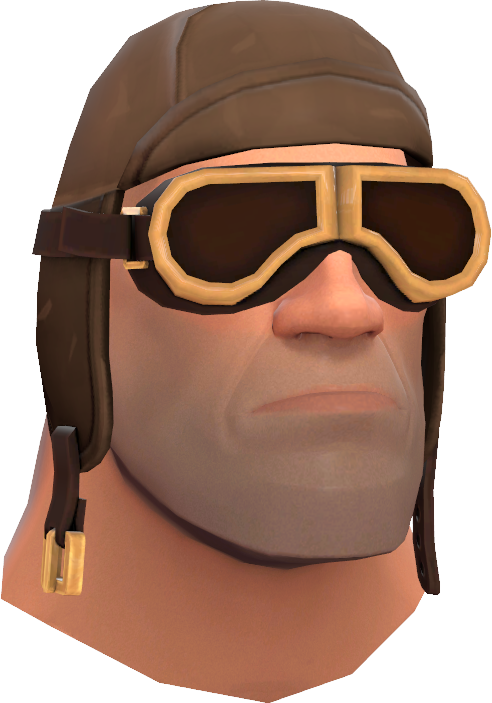 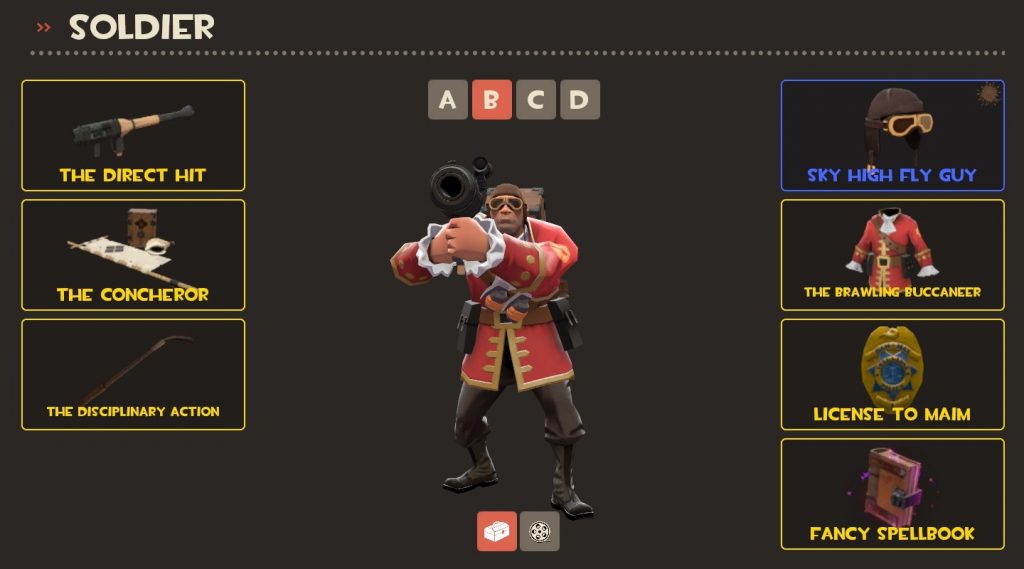 It’s a perfect color for a leather pilot’s hat. 🙂