I was watching this clip from The Tonight Show the other day where Jimmy turns more pictures of celebrities and pop culture from the week into memes:

Oh god, I totally laughed my ass off so hard on that one picture of Kim Jong Un riding a big truck with the meme saying “Ermahgerd! Berg Trerk!! Hernk! Hernk!”. 😛

I was watching this video from The Tonight Show this evening where Seth MacFarlane is chatting with Jimmy about his really cool haircut in 1999, and his comedy-drama sci-fi television series called The Orville:

I gotta admit, Seth is very handsome and talented… giggity.

I took one of the screenshots from Mortal Kombat X where Johnny Cage uses his ‘Here’s Johnny’ fatality on his opponent, but I replaced his face with Jimmy Fallon’s face: 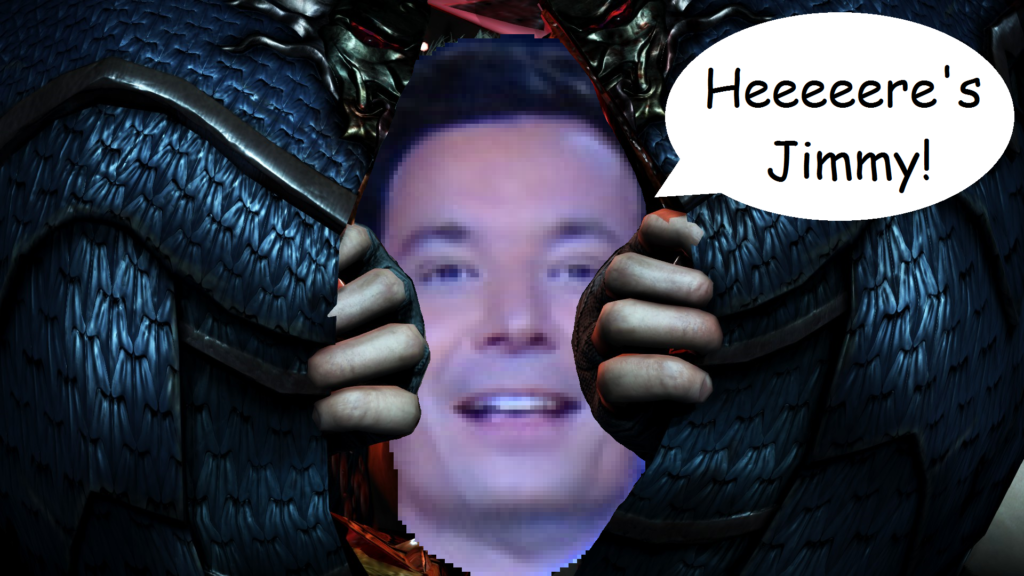 Now that would be an awesome introduction on The Tonight Show. 😛

I found another YouTube video from The Tonight Show where Jimmy Fallon weighs the good and bad of at the White House in his segment called ‘Pros and Cons’:

Oh wow, that Russian leek soup recipe made me laugh. 😛

I found a couple of YouTube videos that I want to share with you guys. This first one is from the Late Show where Stephen is talking about James Comey getting fired by the horrific orange shit stain known as President Donald Trump:

My favorite parts in the video are the New York Herald’s headline ‘Lincoln Commits Suicide’, Comey getting Trump’d, and the most favorite of all: Anderson Cooper ripping out his eyeballs and putting them back on at the end. 😛 And this next one is from The Tonight Show where Jimmy Fallon, who’s dressed as Donald Trump, sits down with Martin Short, who’s dressed as Jiminy Glick, as they talk about Trump’s first 100 days as president:

Ohhhhh my goodness, that too is really hilarious. 😛

I have been watching a couple of videos on YouTube this afternoon, and I want to share them with you. First, this video from the Late Show where Stephen is talking about President Tangerine Mussolini, George W. Bush, spiders, etc.:

And this video is from The Tonight Show where Brian Regan does comedy stand-up:

I like the one joke where Brian is talking about dropping planeloads of boots on the soldiers, totally funny. 😛

I watched this video from The Tonight Show where Jimmy is sharing some books that people should avoid reading in his segment, ‘Do Not Read’:

I mostly like that book called 100 Games for One Player, and one of the games in the book is quite interesting: Listening. 😛

I found this YouTube video from The Tonight Show where Jimmy Fallon, who’s dressed as President Asterisk, goes to a press conference to talk to the reporters about Russia, Michael Flynn and fake news:

I thought that was pretty funny. 😛

I found this YouTube video from The Tonight Show where Jimmy Fallon and First Lady Michelle Obama are writing out Thank You Notes to President Barack Obama, Inauguration Day, etc.

I mostly like the part where Michelle thanks Barack for proving he’s not a lame duck, but her very own silver fox. I’m going to miss the Obama’s being First Lady and President. 🙁

I decided to go on YouTube to see what’s new on the Tonight Show, and I found this one video where Jimmy is comparing duplicate captions before revealing different pics each Instagram account was captioning in the segment called ‘Picture This’: